Stormchasing In And Around Toowoomba Part 3

This storm cell I chased for a couple of hours as it slowly moved west between Toowoomba and Allora. This was a relatively small cell and wasn’t letting off any lightning or hail so I was quite content to drive in and out of it as I chased it across the plains. At one point I ended up right behind the storm while driving around it to find a good vantage point. I liked the way the corn in this field was leaning in towards the storm. I continued to follow the road around past the corn fields and it brought me to another road that let me drive right up behind the storm. After that I drove back the way I came in to Nobby and took one last photo to try get the whole storm in one photo. This is a 4-photo stitched panorama. This next storm was heading north towards Toowoomba so I made a run up Panorama Drive out at Preston to check out the scene. It was quite a sight. This was a 5 shot panorama taken with an ultra-wide lens to try get as much of the storm in as I could. I later drove down to get underneath the storm to get a closer look. This photo is a 4 shot panorama of the cell. And that ends part three. Depending on how the rest of storm season goes there may be a part four at a later date. Any of the photos in these posts can be purchased as a print or canvas. Email me at enquire@timswinson.com for prices. 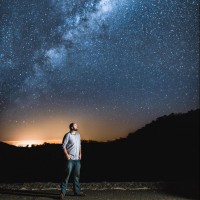